Last week we had our first brave visitors to Alhama de Granada.  My mom and stepdad, Dave came to visit for my birthday.  Team Kezmoh drove our Seat Leon to Malaga to pick them up.  We returned the little car and exchanged it for a minivan for the week.   A minivan is a rarity in Spain because large vehicles are not meant for Spain. The roads are narrow and parking spaces are very tiny.

At the airport Mike took care of the details of switching cars while Sky, Savvy and I planted ourselves outside of customs.  We were overjoyed when we spotted Grammy Sandi and Grampy Dave!  We gave them huge hugs and led them to the minivan.

So glad to see Grammy and Grampy!

The girls chattered all the way to Alhama about their new lives here.  While our special visitors settled into the apartment downstairs (Apartamentos Salmerones), Savannah made a list of the important sites she wanted to share in Alhama.  We hardly gave Mom and Dave time to put their suitcases away before they were pulled out the door for a tour.  Savvy had her list so she was our guide.  We visited all of the important parks, the library, the grocery store, the Churrero, the coffee shop and the school.  Looking back I had to smile because Alhama has many tourists who pass through every day.  I always see them disappearing on hikes into the gorge,  touring the old quarter, and posing for photos in front of the old church but I bet none of them knows where the grocery store is!

On Sunday morning we hiked down to the Churrero for churros and chocolate, a must for visitors to Spain.  The churros are made fresh when ordered and “churros for 6” is enough for an army.  The chocolate is a thick molten pudding rather than a drink and it is served with a spoon.

Grammy and Savannah
Churros and chocolate 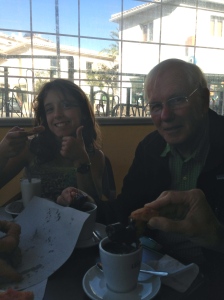 Churros and chocolate
Sky and Dave

Luckily for Mom and Dave we had an all-school, all-day excursion on Monday!   It was an “Excursion al Campo”, a trip to the countryside.

Grammy Sandi and Savannah ready to hike to the campo

Sky, ready for the outing! 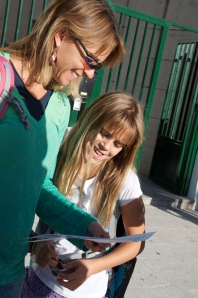 Checking the schedule for the day

The week before Mike and I had been recruited to help brainstorm activities for the day.  It was Halloween week so they wanted us to help with ideas from our Halloween/Harvest festivals at home.  We were delighted to be included and agreed to run a station and bring a typical American snack.  We googled Halloween cookies and although we had never had them before we thought “witches’ fingers” would be a good Halloween snack.  Grammy took charge of making the cookies. Sky and Savannah were in charge of forming the fingers and adding the “fingernails”. We also made Peanut Butter and Jelly sandwiches.  Javier, the school director, enjoyed hearing us say peanut-butter-and-jelly more than the sandwiches themselves.  “Say it again!” he laughed calling a friend over to listen to our funny accents. 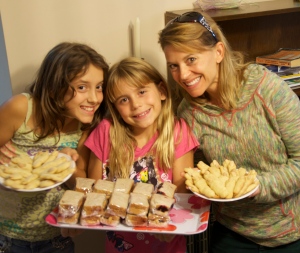 Sky, Savvy and Leslie with our PB&J and cookies 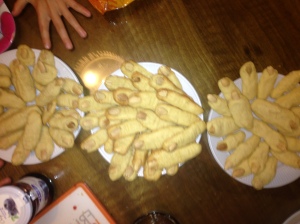 We hiked in a long line of children, parents and teachers down into the gorge across one road and onto a trail into the forest. 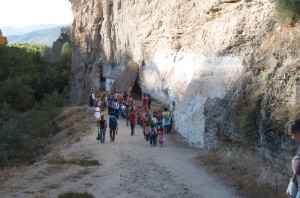 We set up the festival under the shade of tall trees at a picnic ground by the local lake, Embalse de los Bermejales (this is different from the Lake Bermejales that we run around).  Mom, Dave, Mike, Spencer and I manned Estacion #3.  Spencer is a young man from Tennessee who is teaching English at the school this year.  Since he is the other American he was assigned to our group.  We really like Spencer so we were glad for his company. Our station was called “Coma manzanas sin los manos” (eat apples without your hands). We sliced apples and dangled them from a string hanging between two trees.

Savannah and Spencer (pronounced ES-spencer by the Spanish children)

We gave the instructions in Spanish and had the kids repeat them after us in English.  We were supposed to be teaching some English so we quizzed them on the words for fruits and vegetables.  The children were pretty hungry and were motivated to get the apples without using their hands.  It was fun to watch.  In every group there was always one kid, usually a big boy, who would demand that his string be reloaded several times. 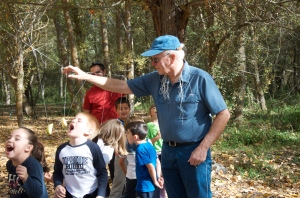 Grampy Dave helping with the apples 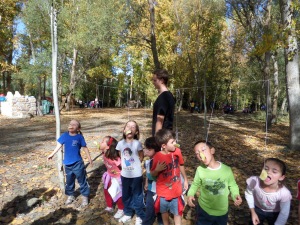 Sky and Savannah stayed with their classes. They had sack races, a mask-making station and other games.

Savvy with her cool autumn mask

Once every class had rotated through all the activity stations, it was time for lunch and most of the parents began arriving.  One mother roasted chestnuts and passed them out wrapped in newspaper. 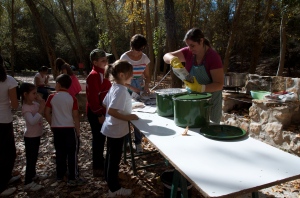 Tables were set up and the food was laid out.  There were Tortilla Espanolas (thick egg and potato omelettes), Empanadas, fried fish, and an entire table devoted to what else,  jamon. We visited with the other parents and tasted all of the foods. I had to explain at least 6 times that I was certain that the jamon was delicious but that I was a vegetarian. Mike just kept some on his plate to prove that he was enjoying it. 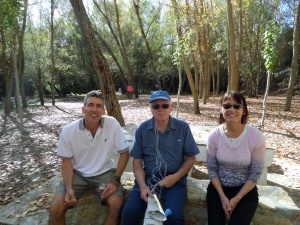 Mike, Dave and Sandi after lunch

After everyone had eaten, Javier jumped around and announced that it was time for some games.  I volunteered for the sack race.  Spencer joined me.  Spencer has a rule that he must never say no if he is invited to try something as long as it is not unhealthy or illegal. I knew when Javier approached him that he would be lining up for the race!  Spencer won and was awarded a bag of candy which seemed to come with about 40 children. They surrounded him and left him with an empty bag. He was smiling, what a prize!

Full of fried calamari, tortilla Espanola, witches’ fingers, and jamon we all hiked back to the school.  It was a long line of tired children who hiked the mile back to school.  I was impressed that even the tiny kids hiked without complaint.  Javier took up the rear making sure no one got lost.

It was evening and we were all tired.  It felt good to have had a station of our own to run.  We felt welcomed and part of the community which was lovely.  Team Kezmoh and Grammy and Grampy went home and watched Despicable Me and went to bed.

Stay tuned for more adventures of Team Kezmoh and visitors.